Lovely Story and Video About HV Parade of Lights 2022 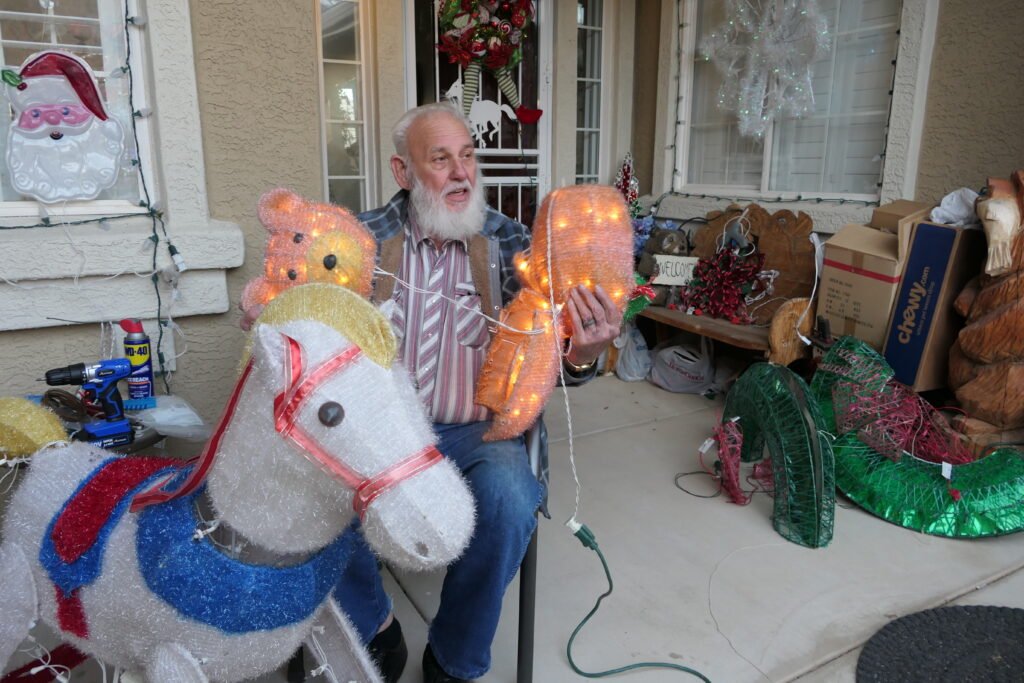 The Nevada Independent did a lovely article and video about the 40th Hidden Valley Parade of Lights! Their original story was posted 12/25/22 and they’ve graciously allowed us to re-publish here, on our site. 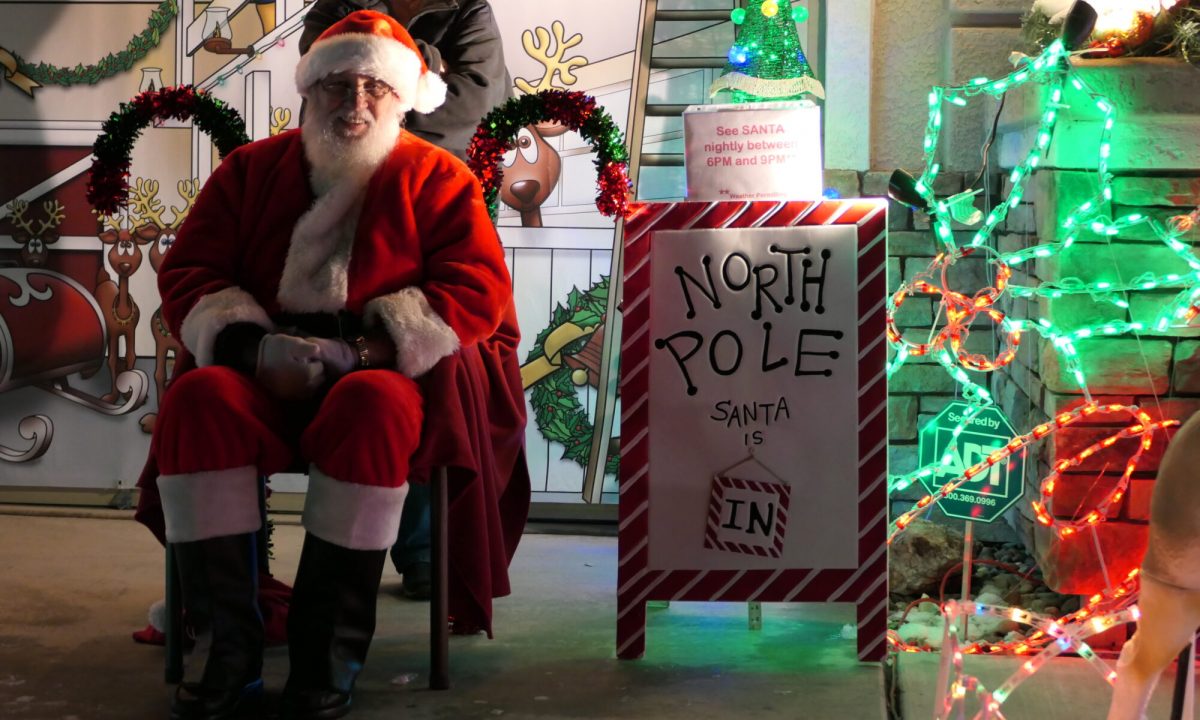 David Roberts dressed up as Santa Claus sits in front of his lights display the night of Dec. 11, 2022. (Carly Sauvageau / The Nevada Independent)

David Roberts sits on his front porch in Hidden Valley — an out-of-the-way neighborhood outside south Reno nestled among the foothills of the Virginia Range — putting together the dismantled parts of a teddy bear that will soon be placed atop an illuminated rocking horse that is nodding its head back and forth.

The light display — one of many around his house — has been in hibernation since last Christmas. But as the calendar inched toward December, they re-emerged to dazzle onlookers who drive through the brightly lit neighborhood.

This year, Roberts’ display has a new addition that he bought at his wife’s request: a mouse holding a plate of cookies and a candlestick. It has taken residence among existing decorations, including a plane piloted by Santa, which is a show of pride for his daughter who’s a pilot.

David Roberts sets up his Christmas display the evening of Nov. 30, 2022 (Carly Sauvageau / The Nevada Independent)

The Parade of Lights runs from Dec. 2 to New Year’s Day, with judging occurring early in that window. Judges then place signs outside the top displays, showing how each ranks in the contest.

Though the association gives out gift cards and dinners to the top competitors on Jan. 1, the Parade of Lights is much more than a contest.

“It brings the community together,” said Marge Frandsen, the association president. “It also gives them a feeling of sharing with the vast community of Reno, Sparks and Washoe County because we get a lot of visitors.”

The top competitors’ prize value rarely breaks even with what they spend on electricity by the end of the month (though the price has gone down considerably after many Hidden Valley residents opted to use energy-efficient LED lights). But for people like Roberts, it’s not about the prizes, even though he does land the coveted first-place designation most years.

“In some ways I wish they wouldn’t even have the competition. It doesn’t matter to me if I get first place or if I don’t get recognized at all … I still enjoy it,” Roberts said.

For the 40 years the Parade of Lights has been held, Roberts has participated in 17 of them. Before that, he lived in California and worked as an electrician for PG&E, usually while working other side jobs, from gas station attendant to hardwood floor layer.

Roberts said he started his Christmas tradition long before he moved to Hidden Valley, back when his oldest daughter — now 58 — was a child. The collection of Christmas wonderments is just a fraction of what he owns. The rest is in storage.

Roberts said it used to take him a week to put everything together, but as he has gotten older, the setup time has extended to nearly six weeks.

Not only does Roberts put up a huge lights display, he dresses up as Santa Claus every year.

“I used to wear the phony beard when I had dark brown hair, but I get by with it now,” Roberts said, stroking the snow white beard he grows out specifically to play Santa.

Roberts especially likes playing Santa for the seniors, who usually come in buses from assisted living homes, and children who visit. He recounted jumping into the senior buses to be greeted with smiles and walking for 45 minutes with a child who had just gotten out of the hospital while other visitors waited.

“That’s my Christmas,” he said.

Another homeowner, Terri Durgin, said that she is competitive by nature but likes to participate to carry on the Parade of Lights tradition. 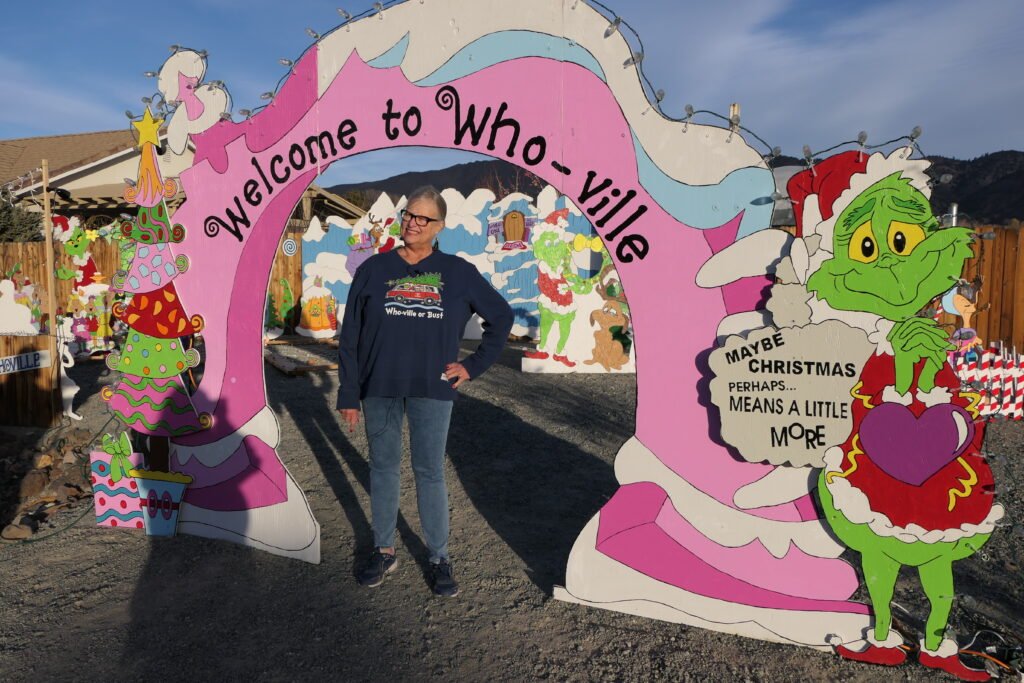 Terri Durgin standing next to her WhoVille display the afternoon of Nov. 30, 2022 (Carly Sauvageau / The Nevada Independent)

Terri Durgin standing next to her WhoVille display the afternoon of Nov. 30, 2022 (Carly Sauvageau / The Nevada Independent)
Durgin’s house sits at what she calls the entrance of Hidden Valley and is decorated with a plywood Whoville display, all built by Durgin, that mimics the fictional town in Dr. Seuss’ book, “How the Grinch Stole Christmas.” The display is interactive, with cutouts and setups for photo opportunities among the Christmas lights.

Forty years later, Durgin’s goal is a reality, and she wants to make the most of it. Aside from her handmade display, she puts a food barrel outside to collect donations for the Food Bank of Northern Nevada. Durgin said she received 1,100 pounds of food last year and 1,600 pounds in 2020.

This year she wants to give back even more.

“We bought this house and we were right at the entrance and I thought it was a perfect place to do the food,” Durgin said. “It’s not all about the competition. It’s more about the event itself.”

Spectators visiting the lights agreed the event isn’t just about the lights.

“This kind of gets me ready for Christmas,” visitor Morgan Lopez said as he walked by Roberts’ fully decked-out display with his partner, Edna Magana, on a snowy December night.

Lopez said this was his first time visiting the Parade of Lights but he plans to come back — especially once he and Magana start a family of their own — and appreciate all the work put in by Hidden Valley residents to make the holiday season special.

“I think it keeps people hopeful for the holidays,” Magana added. “They can come and look at things like this and feel like they have a community.”

Updated 1/3/2023 at 8:56 a.m. to correct the spelling of Marge Frandsen’s name. The original story referred to her as Marge Fransden.

The Nevada Independent is a 501(c)3 nonprofit news organization. We are committed to transparency and disclose all our donors. The following people or entities mentioned in this article are financial supporters of our work:
← Previous post Next post →