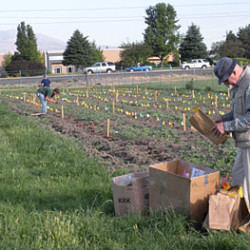 As was reported, the Reno City Council voted to approve the rezoning of the 104 acres of fertile land fronting McCarran Blvd., over the objections of more than 100 people in attendance.

In my opinion, and that of a lot of others, it is a travesty that the intelligent minds of the Board of Regents, UNR administration and the majority of the Reno city council think only of the present with no regard for the future. Kudos to Oscar Delgado and Jennie Brekhaus for having the courage to stand up for what is right.

A vast majority of the world is dying of hunger. We had the land, have the expertise and brilliant young minds to do the research and develop crops on soils that mimic that of many countries of the world, however, today’s dollar gets in the way apparently. Shame on us!

An Exciting Way to Help Your Community
The Fate of CAB