By Betsy Brownfield, HVHA Board Member 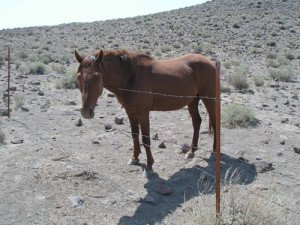 For over a week now, I have not seen Junior, the lone horse that had been getting out on a daily basis. We had been working on the fence but he still managed to get out after being put back almost daily. We still couldn’t figure out where he was getting out and then one day Pat spotted him putting his head through a wire and lifting it up and getting his feet over. We had fixed this spot before but someone is too lazy to walk thru the gate and insists on pulling the middle wire over the bottom wire so they can easily go through and, of course, this also makes for an easy escape for the horses.

Check out the on-line photo of him right before he escaped. Buck once again fixed the wire and hopefully Junior has moved onto happier hunting grounds as it was becoming so dangerous for him. People were just feeding him carrots right from their car, which teaches him not to be afraid of cars. Then I saw someone had dumped a huge bag of apples right next to the side of the road on Mira Loma. It is so dangerous for horses to eat that many apples and right next the road… what were these people thinking??!! Horse’s stomachs are very sensitive and they can easily colic from eating that many apples.

Last month I reported that the Ag Department refused to let us rescue JJ, with the deformed lip…

The Rest of the Story… (continued from our September 2012 newsletter)

Shannon Windle, member of HVWHPF, sent the Director of Agriculture a nice email citing reasons that JJ, with the deformed lip, needed to be picked up and that it would be no expense to the taxpayers or the Department; she never heard a response. She sent a follow-up email and once again no response. Then all of a sudden traps are set down at the end of Clean Water Way, past University Farms and before the sewer treatment plant, where horses have been hanging out for many years. 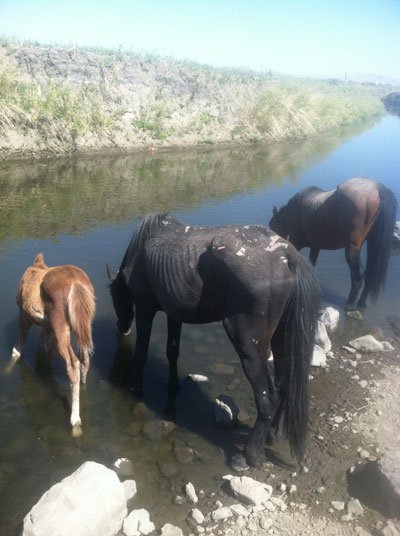 I saw the beautiful paint band in the traps and Blaine, the brand inspector, was waiting for his men to come with the trailers to haul these horses away to the prison, where they process them before they are sent to Fallon for auction. I asked why he was picking them up and he said that he had received a lot of complaints. Not sure who would complain as there are no houses down there. He also said he had gotten some the previous day and all 7 of JJ’s band were captured.

They wouldn’t allow us to pick-up one horse but they instead pick up the whole band and have to use taxpayer money for this. They got 18 total and we also asked them if we could get Grace and her foal and stallion into the pens as Grace was so sick. We had been taking care of her for months and she recovered but is still sooo skinny. I don’t think she would have made it through the winter. She also had a terrible skin problem that needed vet care.

I’ve attached photos of poor Gracie and we have someone who wants to adopt the three of them. We just need to raise money for her vet care and to buy her from the Fallon Auction. We are trying to find homes for the other 18, which we will also need to purchase.

I just received notice that they are sending all the horses to the Fallon Livestock Auction on September 19th, where they will be sold to the kill buyers, if advocates don’t purchase them… I can’t even imagine that some of our precious Wild Horses from Hidden Valley will be sold to kill buyers. We are trying very hard to find them homes and if you know anyone willing to adopt one of these horses or even foster until a permanent home can be found please let me know as time is not on our side. I will post more information as I receive it.

Got Zucchini? Chocolini Cake to the Rescue
Apple Dip