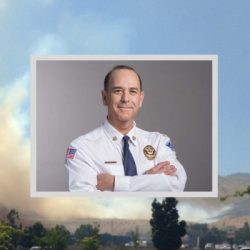 The last two years have proved to be significant summers for wildfires. Truckee Meadows Fire Protection District (TMFPD) responded to twice the number of fires since 2016, and suppressed more than four times the amount of acres burned than in previous years.

In 2017, the wildfire season began in June and continued through December. During the first week of July alone, 23 fires broke out burning 140,000 acres. A total of 360,000 acres burned in Washoe County that year.

The wet winter of 2017, coupled with this past spring, is largely attributed to a robust growth of fuels; particularly fine fuels such as cheat grass. In fact, wildland fuels in western and northern Nevada are now 200-300 percent above average in many areas, a dangerous recipe for a wildfire.

Earlier this summer, the Perry Fire in Palomino Valley is alleged to have been started by fireworks. The fire burned more than 51,000 acres and destroyed two residential structures. The experience in our neighboring state to the west has of course, been much worse.

I urge you to be the first and best line of defense against wildfire by creating defensible space around your home. Defensible space is essential to improve your home’s chance of surviving a wildfire. It’s the buffer you create between a building on your property and the grass, trees, shrubs, or any wildland area that surround it. This space is needed to slow or stop the spread of wildfire and it protects your home from catching fire—either from direct flame contact or radiant heat. Defensible space is also important for effective fire suppression and the protection of the firefighters defending your home.

Creating an evacuation plan is also essential. There are plans you can undertake both inside and outside your home in the event you need to evacuate. Plan ahead. Developing a plan at the time of a fire is too late. Truckee Meadows Fire staff is available to consult with our residents at no charge to help with plans to create defensible space and pre-evacuation preparations.

I’m often asked about open burning. [visit LivingWithFire for more on open burning.] Open burning is restricted to a significant degree. Owners of agricultural lands and backcountry areas rely on pile burning, but it is in our community’s best interest to minimize pile burning through alternatives. TMFPD’s Green Waste Program is designed to increase safety by minimizing open burning and air pollution – and provide you an easier and less costly alternative than trips to the landfill. This November, TMFPD will again support your efforts to create defensible space by accepting your harvested green waste free of charge. Last year, we collected and masticated over 1000 tons which was then recycled into compost.

Today’s wildfire reality is a longer and more intense season. This trend will continue. Risk reduction will be enhanced with partnerships, not through emergency response alone. TMFPD is committed to serving and protecting you and your family, and working with you to help you become the first and best defense from a wildfire.